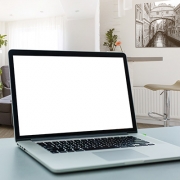 Apple is known as one of the top tech companies on the planet. Every year they attempt, and often succeed, at topping themselves from the year prior in terms of personal device innovation. iPhone’s become thinner, and contain the most powerful camera in any cell phone on the market, AirPods have become a trailblazer in terms of wireless headphone technology, and now the coveted MacBook Pro is becoming the largest personal computer the company has ever made. Standing in at a whopping 16 inches in length, and 4.3 pounds in weight, it surely is the Andre The Giant of the laptop world.

Besides the obvious size change, the one thing tech geeks all across the globe were looking at in this annual computer upgrade was at the keyboard design. Within the past few MacBook models, Apple has implemented a newer and sleeker “butterfly keyboard” design. The name refers to the way in which the keys sit in the keyboard themselves. Standard laptop keys tend to have a little bit of a raise above the keyboard surface, which results in a more powerful and loud “click” as you type. Recently, Apple made their MacBook’s with the “butterfly” design, which refers to the way in which the underside of the keys actually sit more in the keyboard itself, as opposed to resting above it like in standard models. The concept of this design allows for a much thinner keyboard look, less of a loud click, and an overall smoother typing experience. However, individuals were quick to renounce Apple for this choice, as butterfly keyboard designs have been scrutinized in the past based on how easily dust or food particles can get stuck under the keys, making it quite difficult to actually type, and Apple’s design was no different. So when the company announced the new 16 inch giants would revert back to a more standard keyboard design, tech enthusiasts were thrilled.

Besides these upgrades in size and keyboard stamina, the laptop also now contains a 100WH battery which Apple claims will give you up to 11 hours of non stop use. The battery itself is also the Federal Aviation Administration’s limit for laptops that are allowed on planes, according to the Verge. Tech expert reviewer Dieter Bohn also discussed how the speakers on this massive laptop are the best Apple has ever done with their computer’s sound systems.

“The 16-inch MacBook Pro can maintain higher speeds than before and, I think, more importantly, it does so consistently. That all happens, thanks to some design changes that Apple made: it added a larger heat sink, changed the fan design to move more air, made the whole thing slightly thicker, and even rearranged the logic board to optimize for heat dispersal. Apple claims that all of these changes allow it to push 12W more power though the processor under load,” said Bohn.

The laptop itself is also an obvious giant. This is important for anyone to note on the market for a new laptop. The new large design allows for a slightly bigger high definition screen resolution, quality “surround sound” esque speaker performance, and improved keyboard layout and design. The speakers themselves are claimed to be the best laptop speakers on the market currently (Verge). However, that improved sound does mean that it is rather heavier than previous models, and if you think the extra inch of surface area would make a difference in terms of travel, compared to last years model, you’d be correct. If you’re the type of commuter who travels with their commuters in their backpack every day, you’re more than likely to get used to the extra weight, however, should you have to? Especially for a more expensive price.

The new MacBook Pro starts at $2,400. For reference the much smaller 11 inch MacBook Air starts at $1100, and the standard 13 inch MacBook Pro starts at $1300. That’s one thousand dollars more for an extra three inches of screen space. The new Pro is larger, contains amazing sound quality, a more traditional keyboard design, and all the other perks of a standard current Apple laptop. It truly is up to the individual buyer and their intended use for the computer to determine if that would actually be worth it or not.