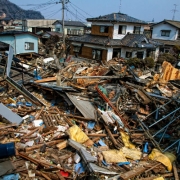 A major earthquake that took place in Alaska in 1964 is supposedly causing the spread of a deadly disease brought on by fungus that washed to shore during Tsunami’s that were induced by the earthquake.

The Great Alaskan Earthquake of 1964 reached a 9.2 magnitude, which induced a series of massive tsunami’s all along the Alaskan coast that also hit Vancouver Island, and parts of both Oregon and Washington. The water from the Tsunami’s brought fungus onto land where it permeated and developed in trees and any other surviving plant life.

“We propose that Cryptococcus gattii (C. gattii, the fungus) may have lost much of its human-infecting capacity when it was living in the seawater. But then, when it got to land, amoebas and other soil organisms worked on it for three decades or so until new C. gattii variants arose that were much more pathogenic to animals and people,” said Dr Arturo Casadevall, from Johns Hopkins University in an interview with the BBC.

As the fungus laid dormant in the botanical life in Alaska it was able to use the surrounding and recovering environment to develop and mutate into a deadly substance that is now affecting people after five decades. The fungus induced illness first appeared in 1999 and since has caused 300 cases of pneumonia like illness; 10% of the cases have been deadly.

The C. gattii pathogen is most common in areas such as parts of Europe, Africa, Brazil, and Australia, mainly coastal areas. Researchers believe the fungus is transported with the water that moves around large shipping boats, however, the fungus doesn’t greatly affect the humans in these areas because it rarely makes it out of the water and when it does, it still takes decades to mutate into the type of fungus affecting those in Alaska.

When cases first began appearing in 1999, scientists and doctors alike were left puzzled as to how a fungal infection to the magnitude that they were seeing, spread so intensely. After researching the forest and analyzing the history of the area, the earthquake tsunami power duo, they came to the conclusion that the 1964 Alaskan earthquake was most likely responsible. Tsunami’s are known to carry dangerous fungal spores that normally stay harmless at the bottom of the ocean. These fungal spores can carry pathogens that affect the human body like an invasive skin or lung infection when mutated.

Scientists have been able to get a greater control over this fungus in the Alaskan areas now, but their concerns have not gone away. Researchers are worried about other areas of the world that have more recently seen Tsunami’s as a result of massive earthquakes, such as Japan in 2011 or Indonesia in 2004. The first time around it took 50 years for the fungus to become a real problem, these cataclysmic events have occurred within the past 15 years, so there’s a long way to go.

“The big new idea here is that tsunamis may be a significant mechanism by which pathogens spread from oceans and estuarial rivers onto land and then eventually to wildlife and humans. If this hypothesis is correct, then we may eventually see similar outbreaks of C. gattii or similar fungi, in areas inundated by the 2004 Indonesian tsunami or the Japanese one in 2011,”  said Dr Casadevall.