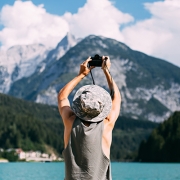 Most anyone with an Instagram account is familiar with the countless number of so-called “influencers” who populate the platform, who seem to make a living posing for the camera in exchange for likes and comments. The owners of these accounts travel the world all throughout the year, visiting unique locales and staying at expensive-looking resorts. The sheer volume of these accounts leaves one wondering exactly how much money influencers make on the platform, and what else the job entails beyond posting extravagant photos and raking in the cash. While the job description certainly seems like a dream come true — who wouldn’t want to be paid to travel the world? — the reality is that, for most, the life of a would-be influencer is full of frustration, hard work, and rejection.

Travel influencers depend upon engaging with their audiences to support their lifestyle. Bloggers and Instagram users build audiences by perfecting their photography skills and learning how to maximize their use of social media platforms to cast a wide net. A big part of the job involves reaching out to tourist organizations, like hotels, to ask for a free stay in exchange for exposure. Additionally, influencers partner with brands, incorporating their products into their social media presence, for ad revenue.

Though the job of travel influencer is a relatively new occupation, the sheer volume of people competing to work in the field means that a sophisticated business model, on both the side of the traveler and the tourist attractions they visit, has emerged. In response to an increase in the number of people looking to exploit vacation spots for social media, the travel industry has had to adapt by learning how to vet requests for free vacations. Looking at the number of followers a particular account has is not sufficient, as measuring engagement, or the frequency with which followers interact with the accounts in question, is the key to determining whether an opportunity to collaborate with an influencer will be profitable. The Japan National Tourism Organization, for instance, considers someone with greater than a 3.5% engagement rate to be influential. In fact, hosting travel accounts with as few as 40,000 followers – so-called “micro-influencers” – can be worth the expenses for a travel organization looking to spread the word about travel opportunities for niche markets with specialized interests.

In addition to being subjected to a high level of scrutiny when pairing up with tourism boards, Instagram influencers face other challenges. A negative stereotype of influencers as being entitled, spoiled, and disrespectful has emerged as a result of incidents in which influencers ignored the sensibilities of the local culture in pursuit of a picture. One couple, for instance, drew criticism for splashing holy water in an Indonesian temple, and more than a few business owners have taken to social media to complain about Instagrammers looking for hand-outs. While the Internet can provide a legion of dedicated admirers, it can also manifest an angry mob when influencers are perceived to misbehave, potentially ending careers. As such, the most successful influencers are careful to ensure that they portray the communities they visit in a respectful and positive light.

It’s important to note that while audiences see only the end product of an influencer’s work – the photo that gets posted to social media, and the pithy caption beneath it — a substantial amount of work goes on behind the scenes. Influencers work hard to build and maintain relationships with partnering organizations, and sometimes hire staff to focus on growing and expanding their audience by engaging with a plethora of social media outlets. And influencers are sometimes lumped together with travel journalists, who are hosted in a particular location in order to cover a developing story, leading to inconveniences on the part of the influencer. There’s a substantial upfront cost to becoming a travel influencer, of course, as early trips before an audience is established will have to be self-funded. And, unfortunately, there seems to be some merit to the stereotype of the Instagram influencer as entitled, as several businesses have reported being on the receiving end of temper tantrums when things don’t go the influencer’s way, making the industry more difficult for its more well-intentioned members.

However, given the continuing growth in popularity of social media sites, especially Instagram, the career of influencer doesn’t seem to be going away anytime soon. Nowadays, an increasing number of people look to social media to plan their vacations, as influencers can turn people on to travel destinations that would otherwise be overlooked. As such, the job of the travel influencer is healthy for the travel industry as a whole, as it expands the number of destinations that travelers are interested in visiting.