Tag Archive for: after hours

You are here: Home1 / after hours 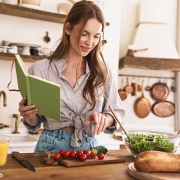 When it comes to working a standard 9-5 job, life can quickly feel very routine and repetitive. We often find ourselves craving something more, but where do we start? So often when it comes to spicing up our lives with some new hobbies or activities, the financial burden of it all can pose as a major roadblock, however, there are plenty of budget-friendly activities that the average individual could easily invest their free time in as a means of enjoying life outside the office and home.

Cooking is one of the easiest hobbies to get into. Obviously we all need to eat, but in an age where we can access any meal we want in a matter of seconds and have it hand delivered to us all thanks to an app, has made cooking seem like a mundane activity, but it shouldn’t be! Instead of using your phone’s to order a meal and spending money that could otherwise be saved, use it to follow one of the countless cooking tutorial pages available on social media apps such as Instagram or YouTube. Cooking can also be done on a budget if you keep up with your local grocery store sales and use the internet to specifically search for recipes involving this week’s best sale items.

Botany is the study of plants, and before you roll your eyes at the thought of studying the exciting world of vegetation, just hear me out. Not only do houseplants add an earthy and bohemian element to any space, they also provide a direct source of clean air and require you to utilize the areas of your home that bring in the most sunlight, promoting a sense of overall positive energy. Working as an indoor botanist for your own personal plant collection can also be extremely cheap, especially if you’re starting from the bottom and growing your new friends from seeds.

The same logic can be applied to more “scientific” hobbies such as astronomy. If you are located in an area of the world with a particularly spectacular view of the night sky as it goes through its many celestial transitions throughout the year, why not learn more about the amazing universe that you bare witness to every night? Amateur telescope kits offer a more in depth look at the sky without breaking your bank as well.

To shift into more general hobbies that will fill your time outside of work, consider making a list of personal goals/missions that you’d like to see yourself accomplish either within the coming weeks, or even more long term. These “self missions” can include things like quitting smoking, exercising, trying to engage with the natural world more, or maybe learning a new skill such as botany or cooking. Whatever it is, take your time and find something that you know you’d be passionate about. Go to the local library and do some good old fashion research on the subject as well.

While we may be discussing finding a hobby to do when business hours are over, why not make that hobby finding something better to do career wise? If you’re in a situation where simply picking up a new weekend activity won’t cure the overall feeling of dread that comes with working five days a week, dive into that. Make your “self mission” one in which you’re no longer working for money but working for pleasure, and the money is just an added bonus.

Obviously, that’s much easier said than done, however, if you turn advancing your career into your new hobby, then there’s no rush to just quit and start a new life, in fact, I’d encourage the opposite of that. For example, if you’re working as a data analyst at some firm in the city, but your real dream is to own your own bakery, turn that dream into a weekend reality.

Make a list of general steps that you would need to take to get to that goal and then within each step, break down the realities of what you’d need to do to check that box. So if one of your steps to owning a new bakery would be to learn more about what it takes to run a business, a “sub-step” to that goal could be taking some night/weekend classes on business. Don’t worry about how overwhelming your list of steps may look when they’re all written down. Visually, it’s nothing more than a bunch of words, symbolically, it represents the things you need to accomplish in order to reach a more fulfilling life. So what are you waiting for?