You are here: Home1 / alcohol intake 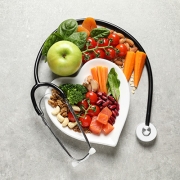 In a massive study conducted by the Harvard T.H. Chan School of Public Health, researchers and health experts alike studied the impact of healthy lifestyle habits and life expectancy. The individuals involved in conducting the study had access to medical data that provided a huge pool of subjects with decades worth of medical records to go through. When all was said and done researchers were able to draw conclusions using data from over 120,000 participants; 34 years worth of records from 78,000+ women, and 28 years worth of records from 40,000+ men.

The researchers specifically focused on five areas of life/health: diet, physical activity/exercise, body weight, smoking, and alcohol intake. The data regarding these five categories was collected through a series of regularly administered questionnaires that would be validated through a multitude of actual medical records; all participants completely consented to the study. These five particular categories were chosen because, based on the death rates in America, these five areas pose the largest risk of premature death when attributed with unhealthy habits.

Obviously, researchers also had to take every individuals specific genetic make up into consideration as well, so they took data on age, ethnicity, medication use, and other health conditions as well. Within the study this is how researchers defined “healthy habits” within each of the five categories.

Once the study was concluded, researchers determined that healthy habits make a huge difference in terms of life expectancy, and not in the obvious sense. The analysis showed that women who met the criteria for all five healthy habits lived, on average, 14 years longer than those who didn’t; for men it was a 12 year difference. If an individual didn’t meet the criteria for any of these healthy habits, they were much more likely to die prematurely from either cancer or cardiovascular disease; the two top causes of death in the world in terms of disease.

Beyond these results, the study also concluded that if any of the subjects adopted just one of the healthy habits listed above their life expectancy would likely be prolonged by two years, regardless of gender, especially if they were over the age of 50.

The experts behind this study want the individuals who observe the results to take away a very specific message. In America, our health care focus is too concentrated on fancy and expensive medications to combat deadly disease as opposed to ways of preventing those diseases in the first place. This isn’t the first time in which experts have stated that the best, and easiest, way to inspire the masses to adopt healthier lifestyle habits is through “public health efforts and policy changes.”

While we wait for those systematic changes to occur, however, it’s never too late to make even the slightest of changes to our lifestyles to give us the best shot at living a long and healthy life. Start slow, as the data stated even one habit adoption can add two years to your life, so what are you waiting for?