You are here: Home1 / alcoholic beverages 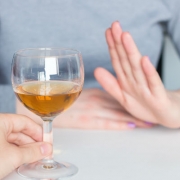 No amount of alcohol is good for your health. Despite scientific consensus supporting this claim, the consumption of alcohol remains a fact of social life for most people, as a night out on the town more often than not involves drinking at bars and other venues. However, young people are growing increasingly aware of the negative consequences of alcohol consumption, which include hangovers, the potential for addiction, and even brain damage and death. As such, and as trends celebrating wellness and self-care are on the rise, business opportunities taking advantage of a growing cultural awareness of the benefits of sobriety have cropped up.

One example is the phenomenon of “sober bars,” which offer the social environment, dining options, and custom drinks of bars minus the alcohol. Geared towards people who want to stop drinking but don’t want to sacrifice their bar-centered lifestyle, sober bars offer so-called “mocktails,” which are elaborate non-alcoholic beverages, and can feature live music and dancing. Oftentimes, sober bars will copy the look and feel of traditional bars so extensively that unless somebody told you or you tried to order an alcoholic drink, you would have no way of differentiating them from ordinary bars. As such, they retain the coolness factor and atmosphere of most bars, while presenting a much safer and healthier alternative.

For people who are serious about pursuing a wellness-focused lifestyle, sobriety is an absolute must. For one, alcohol is by itself calorically dense, even when present in light beers, and as such threatens to thwart efforts to diet and exercise. For people looking to incorporate activities like yoga and meditation into their schedules, alcohol presents an unnecessary burden, as the lasting effects of alcohol consumption inhibit a person’s sense of clarity and focus. A focus on wellness has become popular thanks to social media platforms like Instagram, where influencers frequently share self-care advice and inspirational quotes, and sober bars are often decorated with the intent of enabling aesthetically pleasing Instagram photos. Sharing a picture of yourself at a sober bar, accompanied by an explanatory caption, is sure to make your post stand out on your followers’ feeds.

While consumption of many other drugs like opiates and amphetamines is more dangerous, cultural attitudes that normalize and promote the consumption of alcohol make it the leading cause of drug-related deaths in the US. Alcohol is not only one of the leading causes of death and disease worldwide, but is also the most popular date-rape drug, and violence and sexual assault is dramatically more prevalent in environments where drinking takes place, as the drug increases a person’s impulsivity and impairs their decision making abilities. And alcohol has the distinction of being one of the only drugs for which withdrawal can kill people.

While a commitment to sobriety is often associated with recovering from the disease of alcoholism, you don’t need to have personally had a destructive relationship with alcohol for the prospect of sobriety to be appealing. Being sober during social occasions has a number of benefits that apply to nearly everybody. Never getting drunk means never having to deal with hangovers, and never having to sacrifice one’s confidence in their ability to drive, which is particularly important should there arise a reason why it might be a good idea to quickly leave a party or bar. Without the influence of alcohol, partygoers don’t have to worry about making decisions they’ll regret the next day nearly as much as they would if they were drinking, and gradual damage to the liver and brain over time need not be a concern. Additionally, people who have given up drinking, especially as they approach and enter their thirties, report a higher quality of sleep at night and focus throughout the day, which is consistent with medical findings about the effects of alcohol.