You are here: Home1 / arsenic 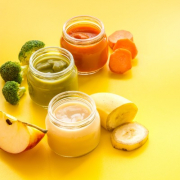 Levels of arsenic, lead, and other toxic metals, that have been proven to harm brain development, have been found in many popular baby food brands, according to a congressional report. The report, which was released this Thursday, showed proof of a US House Subcommittee requesting internal data from seven major companies after Healthy Babies Bright Futures, a nonprofit, published results of the testing they performed on various baby foods.

Of all the companies requested to share internal data, Gerber, Beech-Nut, Earth’s Best Organics maker Hain Celestial, and Happy Family Organics maker Nurture Inc. were the only to comply. Walmart, Sprout Foods and Campbell Soup Company, which makes Plum Organics baby food, have not been as cooperative.

Arsenic, lead, cadmium, and mercury are all metals that the US Food and Drug Administration consider to be harmful to human health. According to senior staff scientist at Consumer Reports, Michael Hansen, those metals can remain in the environment for decades past any pesticide and herbicide use.

“Toxic metals might be more common in baby foods because of the vitamins and minerals added to those foods during processing.”

Hansen claims that rice is a common ingredient in baby foods that tend to have a high level of arsenic due to the fact that it’s grown in water, and the arsenic from the soil dissolves when it comes in contact with water. The fact that these metals are being found in baby food is highly concerning considering a baby’s brain is obviously constantly developing.

By the time behavioral issues or any other symptoms appear within the child, it may be difficult to trace the cause back to baby food, so Hansen recommends concerned parents switch to unprocessed fruits and vegetables. The FDA also recommends feeding babies a variety of grain-based cereals, not just those made with rice.

The report found instances where manufacturers tested ingredients, but not final products, which is extremely dangerous considering toxic metals can have higher levels in a final product. The FDA released a statement this Thursday in which they claimed that any time a food supply is exposed to something toxic they treat it very seriously.

“We acknowledge that there is more work to be done, but the FDA reiterates its strong commitment to continue to reduce consumer exposure to toxic elements and other contaminants.”

Campbell Soup Company claimed that it responded to all the sub committee’s questions, but also noted that the FDA currently has no standards when it comes to heavy metals in baby food, but when it tests certain products they come back as having an acceptable amount of metal in the food itself. Hansen believes that the FDA needs to require all baby food companies to test their final products and make those results available to the general public. This is especially important for organic brands that claim to be all natural, and are able to charge a higher price point for that “quality.”