You are here: Home1 / Aurora 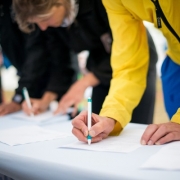 Nearly 2 million people have now signed a petition demanding that the investigation of the death of 23-year-old Elijah McClain be reopened. McClain suffered a heart attack after Aurora police officers forcefully held him on the ground for 15 minutes and paramedics gave him a dosage of ketamine as sedative.

The petition itself calls on the city of Aurora, Colorado – specifically Adams County- and law enforcement agencies to not only fire the officers who held McClain in a choke-hold, but conduct a much more in-depth investigation that would lead to proper charges being met for the individuals responsible in McClain’s murder.

Sheneen McClain, Elijah McClain’s mother, provides photos of Elijah while testifying before a House Finance committee in support of SB-217 regarding police reform at the State Capitol June 10, 2020

On August 24th, 2019, McClain was walking home at night and wearing a ski mask due to his anemia; the ski mask would help him remain warm since anemia can slow down blood flow, especially in cooler night temperatures.  Someone called the police and reported seeing a “suspicious looking man” walking around. Police arrived, told McClain to stop and after he refused the officers resorted to physical means of stopping him; which resulted in a 15 minute choke-hold and the ignoring of McClain’s pleas that he was in pain and couldn’t breathe properly.

Aurora paramedics arrived at the scene and injected McClain with ketamine, he then went into cardiac arrest on the way to the hospital where he fell into a coma and later died. According to Mari Newman, McClain’s family’s lawyer, the 23-year-old was vomiting while being restrained by the police and clearly saying that he “couldn’t breathe.” Newman also claims that an officer threatened to call in “a dog to bite” McClain if he continued to struggle; despite his pleas.

The Aurora Police Department announced that they would be banning cartid pressure holds, and creating a duty for officers to intervene if they believe colleagues are violating department policy. The department has also changed their stance on reports of “suspicious individuals” claiming that officers will not be required to make contact with anyone reported as suspicious, but rather observe them from a distance.

Demonstrators gathered to honor the life of Elijah McClain in Aurora, Colorado on June 6, 2020

“The department recognizes that Black people are reported as suspicious at higher rates than other races. No one should ever be considered suspicious based on the color of their skin,” said Aurora Police Department Interim Chief Vanessa Wilson.

Protesters are more than unsatisfied with the Aurora police department’s response to McClain’s murder, claiming that policy changes within the system often don’t do anything to create real systemic change in the way that white police officers treat black individuals. McClain’s autopsy also revealed inconclusive results in regard to his cause of death, leading to all officers present at the scene remaining uncharged.

McClain’s family launched a fundraiser to help pay for his memorial and legal fees, as they believe that if McClain’s autopsy results were “inconclusive” then that should be even more motivation to investigate the death further. Loved ones have also flooded social media with positive memories and images of McClain, remembering him as a beautiful and quirky young man who used to play violin for stray cats at animal shelters in his spare time. He also worked as a massage therapist in Aurora, where all of his clients regarded him as a positive individual who always made people smile.

If you want to help contribute to Elijah McClain’s family, legal fund, or petition to reopen his investigation, click here.