You are here: Home1 / state regulations 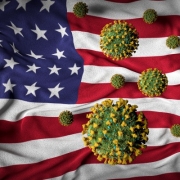 The US reported more than 121,000 new Covid-19 cases this Thursday, breaking the nation’s previous record which was set just 24 hours prior on Wednesday with 100,000 new infections. This week marked the first time the US hit a six-figure number of infections, marking a two day total of more than 220,000 positive tests, and a weekly total of 660,000.

There are currently more than 53,000 Americans in the hospital battling the coronavirus, according to the Covid Tracking Project. Doctors warn that as the hospitalizations and cases in general increase throughout America, the number of deaths will do the same. This Thursday the US reported 1,210 deaths, marking the third day in a row the country has lost more than 1,000 individuals to this virus.

The US is currently averaging 895 deaths a day, a number that is rapidly increasing according to Johns Hopkins University. New Mexico, North Dakota, and Tennessee all reported record-high deaths this past Thursday. The Midwest has been hit particularly hard throughout the entire pandemic, and according to the Covid Tracking Project, hospitalizations are up “following the region’s sharply accelerating case surges.”

“More than 234,900 Americans have died since the pandemic’s start and the CDC projects another 31,000 people could lose their lives over the next two and a half weeks.”

In New Mexico specifically, for example, hospitalizations relating to Covid-19 have increased by 260% within the last month, according to Governor Michelle Gisham, adding that health officials are expecting to run out of general hospital beds within a matter of days.”The state is not trending anywhere in the right direction, residents need to follow public health guidance aimed at curbing the spread of the virus. If we don’t do them, more drastic decision-making will occur, and we will have a horrible November and a dramatically bad December,” the governor said.

Several state leaders are looking at these dramatic increases and are pushing for new measures to help curb the spread. For example in Connecticut new limits are being placed on restaurants, religious ceremonies and event spaces which will be going into effect this Friday. The state is also putting legal restrictions on private gatherings.

In Rhode Island, Governor Gina Raimondo recently announced restrictions which include a stay-at-home advisory that will last from 10 p.m. to 5 a.m. on weeknights. All restaurants, gyms, and recreational facilities must also close at 10 p.m. on weeknights and 10:30 p.m. on Friday and Saturday nights. Restaurants will only be able to stay open later for take out purposes.

The governor also mentioned that a main source of the virus spreading has been indoor gatherings such as house parties that have been brought on by the colder weather. The nation as a whole will need to work together in order to truly curb the spread of this virus. For now, continue to listen to your healthcare professionals and follow all the necessary protocols to keep you and your loved ones safe.