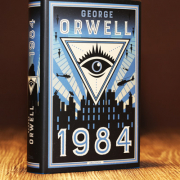 The estate of George Orwell has approved a feminist retelling of Nineteen Eighty-Four. The retelling reimagines the entire story from the perspective of Winston Smith’s lover Julia.

Orwell’s original novel, which was published in 1949, is set in a dystopian future where Great Britain, referred to as Airstrip One, is a part of the totalitarian state of Oceania. Big Brother runs the state, and the Thought Police stamp out any individual thought within the community. Protagonist Winston Smith works for the Ministry of Truth and starts a love affair with Julia.

Julia is known for working in the Fiction Department of the novel-writing machines, both characters are eventually captured for their affair and sent for re-education in Room 101.

In Julia by Sandra Newman, all of the incidents that occur throughout the original novel are told through the eyes of Julia, as opposed to Winston.

“It was the man from Records who began it, him all unknowing in his prim, grim way, his above-it-all oldthink way. He was the one Syme called ‘Old Misery.’ Comrade Smith was his right name, though ‘Comrade’ never suited him somehow. Of course, if you felt foolish calling someone ‘Comrade’, far better not to speak to them at all,” writes Newman.

Orwell describes Julia in Nineteen Eighty-Four as a “more acute person than Winston, and far less susceptible to Party propaganda … She also stirred a sort of envy in him by telling him that during the Two Minutes Hate her great difficulty was to avoid bursting out laughing. But she only questioned the teachings of the Party when they in some way touched upon her own life. Often she was ready to accept the official mythology, simply because the difference between truth and falsehood did not seem important to her.”

Publisher Granta said that when it comes to Julia, “she has known no other world and, until she meets Winston, never imagined one. She’s opportunistic, believing in nothing and caring not at all about politics. She routinely breaks the rules but also collaborates with the regime whenever necessary. She’s an ideal citizen of Oceania.”

“One day, finding herself walking toward Winston Smith in a long corridor, she impulsively hands him a note – a potentially suicidal gesture – she comes to realise that she’s losing her grip and can no longer safely navigate her world.”

Orwell’s estate stated that they’ve been looking for an author to tell the story of Smith’s lover, and Newman “proved to be the perfect fit.”

“Two of the unanswered questions in Orwell’s novel are what Julia sees in Winston, and how she has navigated her way through the party hierarchy. Sandra gets under the skin of Big Brother’s world in a completely convincing way which is both true to the original but also gives a dramatically different narrative to stand alongside the original,” said the estate’s literary executor Bill Hamilton.

“The millions of readers who have been brought up with Orwell’s Nineteen Eighty-Four will find this a provocative and satisfying companion.”

Granata is also gearing up to release Newman’s new novel, The Menian, next June. Julia will be published after that release.