You are here: Home1 / animal sanctuary 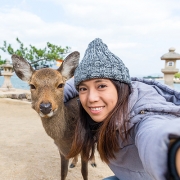 Costa Rica is one of the most popular tourist destinations for travelers. Pink sandy beaches, crystal clear blue waters, fancy beach resorts with unlimited South American buffets and beverages, it truly is a vision of paradise. It is also home to many exotic animals, many of which have become part of a growing tourism trend within the past few years. Tourists love to opportunity to pose with these animals for a Instagram worthy picture to let all of their followers know their chilling in paradise with the local sloths, iguanas, parrots, etc. We’ve all seen it, and many of us have even participated; however, now, the Costa Rican Tourism Institute is asking tourists to stop taking photos with these animals in a new campaign they’re calling “#stopanimalselfies,” which is very on brand for the types of individuals taking advantage of the indigenous wildlife photo-ops.

“Our visitors must know the negative impact caused by selfies and photos showing direct contact with wild animals. Our goal and responsibility as global leaders in environmental issues is to educate and encourage new world ambassadors committed to wildlife protection,”  Pamela Castillo, Vice Minister of Costa Rican Ministry of Environment and Energy (MINAE), told CNN Travel.

MINAE and the Costa Rican Tourism Institute have teamed up together to launch and run this campaign. The campaign is a major call to action for all tourists planning on visiting Costa Rica, and in general for tropical vacationers seeking a picture with their favorite animal. In addition to asking tourists not to pose with wildlife, the two groups are also asking for individuals to pose with stuffed animals of their favorite indigenous species instead and post the photo with the caption “I do not mistreat wild animals for a selfie #stopanimalselfies,” according to CNN.

The reasoning behind this campaign goes beyond just worrying about scaring these animals, and actually has more to do with the health of everyone involved. Many of these animals are wild and are typically caught by the individuals who normally patrol the beaches and resorts with them asking if anyone wants a photo. That means these animals are not used to intense and frequent human interaction. Additionally, the spread of disease is a major concern. Inter-species interactions that are abruptly introduced by force to these animals can cause the exchange of disease from animal to animal, animal to human, or human to animal. A 30 second photo shoot with a sloth can lead to both of you becoming extremely ill within a day.

As an alternative, MINAE and the Costa Rican Tourism Institute recommend going through professional animal handlers to have an up close experience with wildlife. One example given by MINAE is visiting the famous Sloth Sanctuary in Limon, right on the Atlantic Coast of Costa Rica. At this sanctuary, visitors can experience an educational journey all about the life of the sloth and while they’re learning they can watch and interact with actual sloths that are kept at the sanctuary for safety purposes, much like animals who are injured and spend their lives at rescue reservations. While you won’t be able to hold the animals, as disease is yet again the number one concern, this is the next best thing. Wildlife sanctuaries are also extremely common and highly popular in Costa Rica for this reason as well, so there’s plenty of opportunities to get up close and personal with a bunch of exotic animals without worrying about the well being of both you and the animals.

This issue goes beyond just Costa Rica. According to CNN Travel, any tourists who visit Maria Island in Australia are asked to sign legal pledges stating that they will not bother or chase any animals in hopes to get a photo, as well as promises that individuals won’t pick up random animals they come across. In Australia this is an especially big problem, as many tourists think that the cute faces of marsupials, such as the Koala Bear, can seem like an invite to just pick them up and pose, however, you wouldn’t just go up to a random child that you thought was cute and pick them up without consent, so don’t do it here either. Overall the message is clear and simple, respect all animals when travelling, no matter how cute or trendy you think it is, remember that these are living things with real emotions, they just can’t express them.