You are here: Home1 / annual 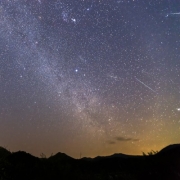 The Geminid Meteor Shower is known as one of the greatest astronomical shows of the year. This December, anywhere from 50 to 120 bright shooting stars will light up the sky every hour in what’s being referred to as one of the darkest winter’s of the decade; scientists are predicting incredibly dark skies with very little light pollution from the moon this winter, meaning observers will have a vibrant and clear view of the show this year.

The Geminid meteor shower occurs every single December when the Earth is passing through a trail of debris that was left by a mysterious asteroid-like object known as the 3200 Phaethon. This is one of the few meteor showers that isn’t a result of a comet or field of comets. With up to 120 meteors per hour it’s known as one of the most “prolific meteor showers of the year,” according to experts.

When compared to traditional shooting stars, this meteor shower is a lot brighter and much more slow-moving, which makes it easy to spot all the moving stars illuminating the December sky. The Geminid meteors are named after the Gemini constellation, which is the most radiant point of the meteor shower according to experts.

All of the shooting stars during the shower appear to originate directly from the Gemini constellation and move outward. Stargazers located in the Northern Hemisphere will likely get a more vibrant and prolific view of the shooting stars due to the fact that the Gemini constellation moves higher up North in the winter sky when compared to the Southern Hemisphere; however, the shower will be visible in all parts of the world, some spots will just have a better view than others.

The Geminids meteor shower occurs every year between December 4th and 17th. For this year, experts are claiming that peak shooting star activity will occur on the night of December 13th and will continue into the morning of December 14th. The shooting stars are typically their most vibrant and constant around 2 a.m., which is when the Geminids’ radiant point is at its highest and the sky is at its darkest.

If you’re an individual who won’t be able to survive in the cold winter night until 2 a.m., scientists claim that gazers will likely be able to start seeing the shooting stars around 9 p.m., but it likely will pick up more and more as the night progresses.

Viewers won’t need any sort of special telescope or equipment to view the show either, just look up! The Geminids are known for being extremely bright, prolific, slow-moving, and constant, and this year the shower is scheduled for the night before the new moon, which means the bright moonlight won’t drown out the beauty of the stars as they fall.

The biggest tip professional stargazers are giving to first time Geminid viewers is to find a spot that’s far away from light pollution sources like street lamps, large buildings, etc. You want a spot with clear skies and free of anything that may obstruct your view. Experts also claim that you should give your eyes about 20 minutes to adjust to the darkness so that you can really see the stars as they fall.