You are here: Home1 / asteroid collision 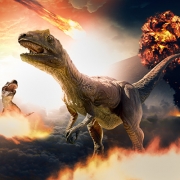 Scientist’s are preparing for the worst when it comes to an asteroid hitting the planet. Mass extinction impact asteroids are guaranteed to occur every few million years, which is why they’re not worried about very often. One of the most significant occurrences being when the dinosaur population was completely eradicated, which is what people remember the most.