You are here: Home1 / Australian firefighters 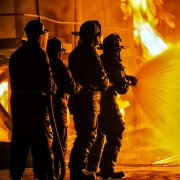 Climate change has certainly taken its toll on our planet within the past decade. 2019 was defined by a myriad of natural disasters and unfathomable damage to the Earth and its many inhabitants. Specifically, the Australian bushfires have kept the continent ablaze for over three months; burning over 2.3 million hectares of land, and killing over 1 billion animals.

While climate change wasn’t the sole reason for the fires, as Australia has an annual bushfire season regardless, it definitely intensified them to a level that the continent has never experienced before. The same issue occurred in California earlier in 2019 when the results of climate change only further fueled the wildfires that ravaged the state.

Australia’s firefighters did their best to contain the fires and focus on search and rescue efforts for any and all living things. They even called on American firefighters to join the movement, creating a unified law enforcement base that would work to contain the fires as much as possible. Since these bushfires were unlike anything that most firefighters have seen in their career, some departments are developing new methods of training to better prepare them for the unexpected.

These new methods involve virtual reality (VR) technology that can quite literally place the firefighters in the middle of a massive bushfire without any risk of actual injury or burns. The specific VR technology that Australian and American firefighters are beginning to implement into their training programs come from an Australia-based tech company known as FLAIM Systems.

“The whole point of VR is that we can put people in a traditionally dangerous situation, let people make decisions, and let people make mistakes. The VR technology produces realistic renders of smoke, fire, water and fire-extinguishing foam in several different scenarios, such as a house fire, an aircraft fire or wildfire,” said James Mullins, founder and CEO of FLAIM Systems.

Beyond the visual element, Mullins states that the technology also pairs with a heat suit that can replicate temperature levels based on each VR fire scenario. The suits themselves can heat up to 100 degrees Celsius, and also pairs with a FLAIM extinguisher that has sensory elements to replicate the force one would feel if they were actually extinguishing a fire, or putting it out with a fire hose. The suits also are able to measure the trainee’s heart and breathing rate, to ensure that they remain calm and steady during the simulation.

The technology is especially beneficial to volunteer firefighter trainees who don’t get as much exposure to real world fires; it also is much more environmentally friendly. Typical firefighter immersion training involves setting contained fires on designated plots of land, which not only releases unnecessary smoke/pollutants into the air, but also requires massive amounts of water; which is problematic for environments like California and Australia that have both found themselves dealing with severe droughts within the past few years.

After California’s devastating 2019 wildfires, the Cosumnes Fire Department in Sacramento decided to test using VR technology to train 20 new recruits for future emergencies (this was October 2019, right before Australia’s bushfire epidemic). The trial period with the new recruits, and some more experienced firefighters as well, was hugely successful, to the point that they continue to use the VR training program now, as well as other departments in the state.

“It allows them [trainees] to experience first hand the unique challenges with communication, limited visibility and come face to face with the flames in fire situations that they most certainly will encounter during their firefighting career. I could feel my heart rate climb as I looked around the room, seeing where the fire started, watching the rapid rate of fire spread. It was amazing to experience the inherent risk, extreme danger and fire intensity without feeling any of the dangerous effects from the fire,” said Cosumnes Fire Department Captain Julie Rider