You are here: Home1 / automatic 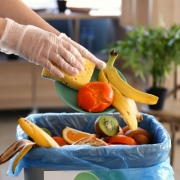 Winnow Vision is building artificial intelligence tools to help chefs run more profitable and sustainable kitchens by cutting food waste in half. Its recent success in securing $12m in fundraising follows an $8m loan from The European Investment Bank (EIB) which in total means the firm has raised a staggering $20m in the last month.

Ingenious was the latest to announce that its Infrastructure Ventures EIS Service has invested in Winnow, the technology company behind Winnow Vision, the artificial intelligence tool helping chefs cut food waste in half, as it completes its series B round of funding at $12m. Other co-investors in this fund raising round include Ingka Investments, Mustard Seed, Circularity Capital, D-Ax in addition to Ingenious. This follows a recent loan from The European Investment Bank (EIB) and in total means the firm has raised $20m in the last month, allowing it to focus on global markets. Ingenious co-invested in the latest funding round through the Infrastructure Ventures EIS Service, representing its third investment to date.

Winnow believes that food is far too valuable to waste and that technology can transform the way food is used. For this reason, their mission is to help the hospitality industry tackle avoidable food waste by connecting the kitchen, empowering chefs to run a more efficient operation.

According to the Winnow website, food prices have risen by 120% since 2000 and most commercial kitchens simply don’t know how much they waste – traditional manual tracking using pen and paper is prone to error and costs staff valuable time while generating only marginal reductions in waste. In fact, commercial kitchens waste up to as much food as they generate in profits! The hospitality sector wastes 600,000 tonnes of food per year compared to the retail sector (including supermarkets) which wastes 400,000 tonnes of food per year (WRAP). What’s more, almost two thirds of the food waste the hospitality sector sends to landfill could have been avoided (DEFRA Food statistics pocketbook 2013 refers to waste from hotels, pubs, restaurants and quick service restaurants).

Launched in a single staff restaurant in 2013, Winnow has been adopted by more than 1,000 sites globally and is now operating in 40 countries with offices in London, Dubai, Singapore, Shanghai, Cluj-Napoca and Iowa City. Winnow’s latest AI product Winnow Vision, the most advanced food waste technology on the market, has been developed to automate waste tracking, enabling chefs to run more profitable and sustainable kitchens. With global clients already adopting Winnow Vision, from IKEA stores through to the Armani Hotel in Dubai, the demand by companies to drive down food waste in 2019 is increasing.

Kitchens using Winnow tend to see a 40-70% reduction in food waste within 6-12 months, driving food cost savings between 2-8% in total, which improves profit margins whilst operating in an ethical manner.

Guy Ranawake, Investment Director at Ingenious, commented: “We are very happy to support Winnow and look forward to seeing the growth of the company which aligns strongly with our investment strategy and sector focus, including resource efficiency.”

Marc Zornes, CEO at Winnow, said: “We are very excited about driving the business forward in our global fight against food waste and we are grateful for the continuous support of our investors. This year we launched our ground-breaking AI product Winnow Vision, and chefs using Winnow around the world are saving $33m worth of food from going to waste annually. We have set a target to save our customers $1bn by 2025, and this investment will accelerate our technology development and business development approach to help achieve this ambition.”

Winnow Vision works by taking photos of wasted food as it’s thrown away and uses the images to train itself to recognise what has been discarded. Winnow’s systems have already reached and surpassed human levels of accuracy in identifying wasted foods. This means for clients, over time, these systems will enable their kitchens to automatically register food waste without any human interaction. Food will be thrown in the bin and the data will be captured automatically.

The transaction was led by Ingenious’ infrastructure division and represents the third investment from the Infrastructure Ventures EIS Service, following the backing of Over-C, an analytics company focused on operational performance in the workforce management market and Reactive Technologies, a world leading technology platform facilitating the transition to a low carbon future.

Ingenious is an FCA regulated alternative investment manager that specialises in media, infrastructure, real estate and education. Founded in 1998, the company has raised and deployed over £9 billion of capital on behalf of clients across all the operating divisions since inception. Ingenious’ infrastructure division has deployed over £720m in energy infrastructure projects since it was established in 2011 across the UK, Republic of Ireland and Australia. A dedicated team of some 30 investment professionals have experience across investment, finance, law, accountancy and engineering. The infrastructure management team benefits from lengthy experience in the origination, execution and management of investments in the infrastructure sector and related technologies, including energy, mobility, digital and resource efficiency.