You are here: Home1 / ballistic 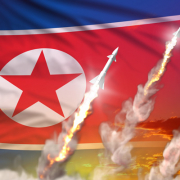 According to the Japanese Ministry of Defense, North Korea fired a ballistic missile over Japan early on Tuesday morning. South Korea and the US responded by conducting a joint strike package flight and precision bombing drill, South Korea’s Joint Chiefs of Staff told ABC News Tuesday.

The Japanese government initially issued a “J-Alert” to citizens through its emergency warning system, telling residents to remain indoors in sturdy buildings or underground for safety.

The government didn’t try to attempt to shoot the missile from North Korea down after determining it didn’t pose a threat, according to a spokesperson from Japan’s government.

Residents in both Hokkaido and Aomori, and surrounding northern areas, were advised to report any debris sightings to police or fire officials immediately.

The last time North Korea flew a missile over Japan was in 2017, but this launch marks the seventh time that the nation has witnessed a missile from North Korea.

Since January of this year, North Korea has shot 21 ballistic missiles and two cruise missiles, which is considered a record-breaking number of launches in a single year, according to reports from ABC. Tuesday’s launch was North Korea’s fifth missile test in a week.

Japanese government chief spokesperson Hirokazu Matsuno spoke with the media at a press conference where he warned citizens not to touch or pick up any debris.

“We ask that people return to life as usual, calmly,” Matsuno emphasized.

“No damage has been reported so far and a search is underway for debris. Officials are gathering information and will work with South Korea and the U.S.,” another spokesperson said.

“North Korea’s actions threaten Japan and the international community. Missile launches like this go against the U.N. resolutions. Japan will launch a strong protest against North Korea in light of this. All new information will be shared promptly.”

“The United States strongly condemns the Democratic People’s Republic of Korea’s (DPRK) dangerous and reckless decision to launch a long-range ballistic missile over Japan,” The White House said in a statement Tuesday.

Jake Sullivan, US National Security Adviser, spoke with his counterparts from Japan and South Korea about the launch as well, according to Adrienne Watson, a White House National Security Council spokesperson.

In response, Jaechun Kim, a professor in South Korea, stated that the US, Korea, and Japan need to “mobilize cooperation from like-minded countries in non-UN sanctions to thwart North Korea’s provocations.”

“A unified front must be established that imposes sanctions on North Korea, as they did on Russia. This is the only way to penalize North Korea for its bad behavior.”

“North Korea just does what it needs to do these days. So, with or without China’s support, it is quite likely for the North to conduct the 7th nuke test. It will be interesting to see whether Xi Jinping will throw his weight behind Kim Jong Un,” Kim said.