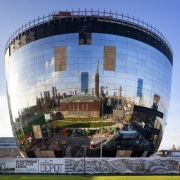 Smack in the middle of Rotterdam is a structure that curves over 120 feet in the air and reflects the clouds through its walls of mirrored glass. The Boijmans Van Beuningen museum now has a new open storage extension that will contain collections of over 150,000 objects from a wide variety of collections.

Art handlers are projected to begin moving pieces from the museum’s archives in December of this year, and it will open fully to the public late 2021. The building was originally a massive warehouse, but thanks to the Dutch design firm MVRDV, it has been transformed into a structure that staff are referring to as The Depot.

Instead of keeping their most valuable jewels and pieces behind closed doors, the museum invested $50 million into an “open storage” concept with the Depot, which is an extension of the museum itself. The museum can currently only display about 8% of the pieces that the Boijmans museum has collected throughout the years, so the whole point of the Depot is to give museum goers the opportunity to see how vast that entire collection actually is.

This is one of the first times in history that a museum will be building an open-storage facility to this degree. Sjarel Ex is the Boijman’s director who recently spoke with the press about how after a flood in 2013, his team knew they needed to make a change in how they stored and displayed the works that they’ve collected.

“What’s the English expression – ‘out of sight, out of mind’? So much of what museums do happens in the dark. We wanted to bring some of it into the light.”

Winy Maas is one of the main architects who’s been working tirelessly on the Depot and explained how difficult it’s been to create “vault-like conditions” in a regular public building structure. The structure also had to be divided into five different “climate zones” with various temperature settings, as certain pieces of art need to be stored in specific conditions to maintain their beauty.

Museums in the past have done expansion projects such as this one and the main issue has always been the amount of space they take up. The concern is over how much more certain museum collections will continue to expand. 150,000 pieces of art seems like an unfathomable amount, but considering the museum has been around since 1935, it makes sense that they would’ve curated that many works, so what will happen within the next decade when that collection expands even further?

Ex is aware that this project is very experimental, and with that comes the risk of failure, however, he seems more enthusiastic than concerned when it comes to the opening. Regardless, the project marks a monumental transition for the way humans experience history and culture at these establishments. Museums all over the country are beginning to work on projects that will expand their retail space and allow for even more collections of art to be displayed to the public.

The redeveloped Museum of Modern Art in New York City now allows for an additional 15,000 square feet of gallery space that extends on six floors. The V&A announced an open-storage project that will open in London in 2023 and allow for over 250,000 pieces of art to be displayed throughout. For now, only time will tell how successful these massive expansion projects actually are.