You are here: Home1 / The Very Hungry Caterpillar 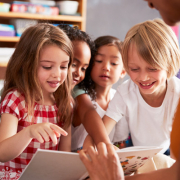 Eric Carle, genius artist and brilliant creator of numerous classic children’s books, unfortunately passed away this week at the age of 91. Tributes have been flooding social media from adults, celebrities, and children alike, all of different ages, but all impacted by the work of Carle’s creative imagination.

One of Carle’s most famous books is “The Very Hungry Caterpillar,” which as most of us know is the tale of a young caterpillar on the cusp of becoming his beautiful butterfly self, but before he can go through his transformation, he must eat his way through the entire book to make sure he’s ready for his metamorphosis.

The book is so captivatingly illustrated with Carle’s signature style of bright colors and fun shapes, and was initially published back in 1969!

Before the caterpillar heads into his cocoon, however, he ends up coming down with a stomach ache from his week-long feast in preparation for his transformation.

Now, a 2015 interview with Carle from the Paris Review has resurfaced in which he claims he didn’t like this part of the story, and talked about why he fought his publishers against including it in his otherwise extremely happy novel about a caterpillar’s journey to becoming a butterfly. “My publisher and I fought bitterly over the stomachache scene in The Very Hungry Caterpillar. The caterpillar, you’ll recall, feasts on cake, ice cream, salami, pie, cheese, sausage, and so on.”

“After this banquet I intended for him to proceed immediately to his metamorphosis, but my publisher insisted that he suffer an episode of nausea first—that some punishment follow his supposed overeating. This disgusted me. It ran entirely contrary to the message of the book.”

Carle went on in the interview to explain how he told his publishers that children aren’t going to process the caterpillar’s actions as gluttonous, which is apparently what they were mainly concerned with. In fact, many pediatric nutritionists and children’s food bloggers claim that the stomachache scene actually is more harmful than good, due to the fact that it shows kids we’re going to feel bad and shameful after indulging ourselves in the things we like.

“The caterpillar is, after all, very hungry, as sometimes we all are. He has recognized an immense appetite within him and has indulged it, and the experience transforms him, betters him. Including the punitive stomachache ruined the effect. It compromised the book,” Carle explained in the interview.

During the same interview he gave his thoughts on society’s view of childhood obesity:

“I don’t recognize childhood obesity. No one should. I see children doing what they like, which is eating, and doing it without the shame or remorse later drilled into them by Judeo-Christian ethics.”

Eric Carle knew all the way back in 1969 that the stomach scene would be harmful, and no one should feel shame when they’re simply eating good food which they need anyway to grow. Carle’s positivity, creativity, and strength is one of the reasons he’s one of the most well-recognized authors in the world, he will be deeply missed.