You are here: Home1 / alphabet

Google’s parent company, Alphabet, posted that they earned $65 billion in revenue during the third-quarter, exceeding Wall Street’s initial predictions and doubling their expected profits thanks to online advertisements.

Over the last three months Alphabet’s revenue rose by 41% to $65.2 billion, marking its largest revenue figure in 14 years. Before the pandemic the corporation posted a profit of $21 billion.

Alphabet saw its share price increase by 57% as well for the year. This makes it the best performer of all the “FAANG” companies (Facebook, Apple, Amazon, Netflix, and Google). Its advertising revenue alone rose to $53 billion, up from $37.1 billion last year.

Revenue from Alphabet’s cloud division rose by 45% to $4.99 billion, trailing behind Amazon Web Service and Microsoft Azure. Operation losses for the sector decreased by nearly 50%, from $1.2 billion to $644 million.

Sundar Pichai, chief executive of Alphabet and Google, said “search is the heart of what we do. This quarter’s results show how our investments there are enabling us to build more helpful products for people and our partners.”

“Google campuses and cloud services will be run on carbon-free energy by 2030, and Google’s maps function will offer drivers an eco-option to find more fuel efficient routes to destinations and a wildfire system, so that consumers can make quick and informed decisions during emergencies.”

Chief business officer Philipp Schindler said “it’s clear that uncertainty is the new normal for the global economic outlook, as uneven access to Covid vaccines affect different countries and regions experienced rates of economic recovery. The world is in flux. When it comes to anticipating change, predicting demand and investing in innovation, businesses need as much support now as they did a year and a half ago.”

In shopping, Schindler said, “some regions were experiencing a fourfold increase in search activity. Often those searches preceded in-person visits to stores. Bricks-and-mortar isn’t dead. Instead omni-channel [shopping] is in full force.”

Alphabet also emphasized their commitment to high-quality and accurate journalism, as well as open-access to information for all. Schindler explained that within the last quarter the company has added 120 news providers to it’s 1,000 information sources on Google’s News Showcase.

Google intends to also purchase a New York City office building for $2.1 billion in the near future, as well as another campus in Silicon Valley, as a means of motivating employees to come back to the office. 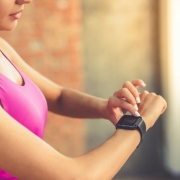 Google’s parent company, Alphabet, is currently in talks to purchase the fitness-oriented smartwatch manufacturer Fitbit, according to Reuters. In response to the news, Fitbit’s stock rose by 18% before the stock was halted. If the purchase goes through, the implications for both companies as well as for the smartwatch industry generally could be significant.

While Fitbit enjoyed tremendous popularity with the release of its original fitness trackers, which introduced the concept of tracking one’s health with a smartphone-connected wearable device to many consumers, the company has since been overshadowed by the release of competing products, not the least of which is the Apple Watch. Apple’s take on the smartwatch concept includes essentially all of the fitness-related features Fitbit’s products offer, including heart rate monitoring and sleep tracking, while adding unique features and integrating deeply with the company’s iOS platform. Google, on the other hand, has found little success with its Android Wear operating system, and the Android-compatible smartwatch market in general suffers from an overabundance of mutually-incompatible software choices, including Samsung’s Tizen and Fitbit’s proprietary operating system.

The acquisition of Fitbit, then, could potentially lead to an abandonment of the Wear OS platform, which has failed to meaningfully take off with both manufacturers and third-party software developers, and the integration of Fitbit’s software more deeply into the Android operating system, among other outcomes. Though Google has recently made strides in its hardware offerings, the company has never manufactured a smartwatch. Currently, Fitbit products are compatible with both iOS and Android devices, providing near-identical functionality on both; it remains to be seen whether a Google-owned Fitbit would continue to produce devices that work with Apple’s line of smartphones. In the past, Google has shown more of a willingness to work with its competitor’s platform than Apple has; Google has made many of its applications available on Apple’s App Store, while the inverse is not true. As such, there’s a good case to be made that a Google-owned Fitbit would continue to make fitness trackers that work with iPhones, though they may begin to include Android-only features stemming from a close relationship between the manufacturer and their potential parent company.

In a bid to maintain its relevancy amidst increasing competition from larger manufacturers, Fitbit acquired Pebble, one of the very first smartwatch manufacturers which began life on the crowdfunding website Kickstarter, in 2016. This coincided with the discontinuation of all Pebble smartwatches as the original team was absorbed into the larger company, much to the disappointment of fans of the first significant smartwatch. Today’s news suggests that Google is poised to make a similar move. While the Fitbit brand still has sway over consumers, the company’s notoriety is fading, and Google is focused on unifying its hardware offerings under the Pixel brand umbrella following the announcement of its Pixel 4 smartphone, the new Pixelbook, and the upcoming Pixel Buds. Google has also recently discussed its focus on “ambient computing,” or a way of interacting with computers that blends seamlessly into the user’s ordinary life. As such, it wouldn’t be surprising to see Google shutter the development of Fitbit-branded devices, instead announcing a “Pixel Watch” or something similar, which would combine the health-tracking capabilities now standard on smartwatches with new Android-specific features.

As of now, of course, it’s unclear what these features could entail, but Google’s unmatched investment in developing artificial intelligence combined with their focus on ambient computing could offer clues. For several years, Google has developed and refined its Google Assistant, which is featured on Android phones as well as the Google Home line of smart speakers; it stands to reason that the virtual assistant would make the leap to any potential Google smartwatch. Additionally, Google has debuted radar-based gesture recognition technology on the Pixel 4, which allows users to control their phone by moving their hands over the screen; a similar system, if executed effectively, would seem right at home on a Google smartwatch. As Google has a history of making surprising and innovative technological developments, particularly in the areas of neural networks and machine learning, the company has a lot of potential to make waves with its take on the smartwatch.