You are here: Home1 / augmented reality 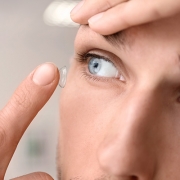 As time goes on, more and more technologies that were once considered firmly in the realm of science fiction have become realities. Virtual reality, for instance, was once an idea found in movies depicting the future, and is now a technology that enjoys widespread popularity among fans of video games. And video calls, which first made their appearances in classic sci-fi stories like 2001: A Space Odyssey, have become commonplace thanks to Skype and Facetime. But one technology that has long been considered squarely in the realm of fiction is now close to becoming a reality, thanks to the work of technology start-up Mojo Vision, which plans to sell a contact lens that provides enhancements to the wearer’s vision in the form of improved eyesight during night and a display that superimposes images directly onto the wearer’s field of vision. Such technology is ambitious, to be sure, but Mojo Vision is confident that it can deliver on their groundbreaking promise.

Currently, the company’s website features slickly-produced proof-of-concept videos demonstrating various proposed features of the product, including navigation imagery superimposed onto one’s view of the road and the ability to highlight various objects in a person’s path. These videos are clearly meant to illustrate the potential of the product in order to attract investors and customers, but they also provide a valuable insight into the company’s vision of how their products can augment the lives of their customers. Companies like Google have experimented with wearable technology with products like Google Glass, which was based on a similar concept but failed to take off as the frames were considered too bulky and obnoxious to wear in public. Mojo Vision’s product, however, would be virtually invisible to everybody except the wearer, virtually eliminating concerns of the aesthetic impact of the technology on the face.

Mojo Vision has been working on their contact lens product for five years, but has only recently unveiled a prototype of their product to reporters, who got a chance to experience a version of what may some day become the future of human-computer interfaces. While the company did not allow journalists to wear the prototype lenses, a reporter from the BBC had the chance to test out the product by holding it a few inches in front of her eye. According to Mojo Vision, their contact lenses will be powered by a battery that lasts for a day and will have to be charged overnight. The lens is planned to be controlled by eye movements, and future versions of the prototype are planned to include a color display as well as support for stereoscopic imagery. Night-vision technology, which currently exists only in prototype form, is planned to work by highlighting the edges of objects, making it easier to navigate in the dark. The lens’s display is powered by a small green dot located directly in the center of the lens, which projects images onto the retina with MicroLED technology.

As of yet, the company is not ready to show off what the software experience of the contact lens is planned to look like. However, Mojo Vision has used virtual reality to simulate their goals for the lens’s operating system, which is planned to allow users to check their notifications, the weather, and more by glancing into the periphery of their vision. According to Mojo Vision, the prototype lens is safe to wear, as it is oxygen-permeable and has in fact been worn by employees. However, the question of whether or not consumers will be willing to wear a piece of technology with a battery and a display on their eyes remains unresolved. That being said, the technology may be of particular use for people with vision problems like macular degeneration. While Mojo Vision has committed to eventually releasing a real product instead of allowing the technology to become vaporware, it remains to be seen how successful such an ambitious product can be.