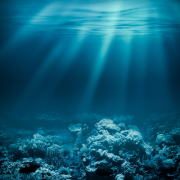 According to MIT News, researchers at the Massachusetts Institute of Technology have potentially advanced the way that scientists can explore unknown regions of the ocean, track pollution, and/or monitor climate change.

Scientists currently estimate that more than 95% of the oceans on Earth have never been explored. One of the biggest obstacles researchers face is the high cost of powering an underwater camera that can withstand the environmental changes that come from the extreme depths of the ocean.

Typically, researchers need to have the underwater cameras that currently are in use to observe the ocean tethered to a vessel or need to send a ship out to recharge the batteries of the camera.

Now, MIT researchers have developed a battery-free wireless underwater camera that is “100,000 times more energy efficient than other undersea cameras.”

The device is said to take color photos, even in dark underwater environments, and can transmit the data from the images wirelessly through the water.

The camera itself is powered by sound, and works by converting mechanical energy from sound waves traveling through the water into electrical energy that can then be used to power its imaging and communication systems. Once the camera captures an image, it uses the sound waves to transfer data to a receiver on land that will reconstruct this image taken.

The scientists behind the camera also think the device is so impressive because it doesn’t need a power source, meaning it can be underwater capturing images for weeks before it needs to be retrieved. This will allow researchers to explore new depths for longer periods of time.

“One of the most exciting applications of this camera for me personally is in the context of climate monitoring. We are building climate models, but we are missing data from over 95 percent of the ocean. This technology could help us build more accurate climate models and better understand how climate change impacts the underwater world,” explained Fadel Adib,  senior author of a report on the device published in Nature Communications.

Sayed Saad Afzal, Waleed Akbar, and Osvy Rodriguez are co-lead authors on the study as well, as well as Unsoo Ha, Mario Doumet, and Reza Ghaffarivardavagh.

Adib explained how initially, the group was “trying to minimize the hardware as much as possible, to create new constraints on how to build the system, send information, and perform image reconstruction. It took a fair amount of creativity to figure out how to do that.”

The camera uses red, green, and blue LED lights to reflect on the white parts of the image, which can then “reconstruct the color image taken,” according to Akbar.

“When we were kids in art class, we were taught that we could make all colors using three basic colors. The same rules follow for color images we see on our computers. We just need red, green, and blue — these three channels — to construct color images,” he explained.

According to the report, the researchers tested the camera in several different underwater environments. Through those trials they were able to take high-quality photos of fish and plants in dark environments that are typically very difficult to capture.

Now that they have a working prototype, the next step will be for the researchers to enhance the device to be used in more real-world settings. Overall, they want to increase the camera’s memory, extend its range, and ability to stream images and potentially videos in real time.

“This will open up great opportunities for research both in low-power IoT devices as well as underwater monitoring and research,” says Haitham Al-Hassanieh, an assistant professor of electrical and computer engineering at the University of Illinois Urbana-Champaign.