You are here: Home1 / adolescence 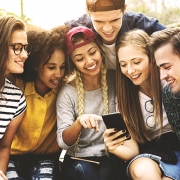 There’s no question that frequent social media use has become a virtual cultural necessity, especially among young people. Social networks that were for millennia supported by face-to-face interpersonal relationships now exist mostly online, and such a drastic shift has raised concerns about how social media use impacts mental health. The science on this subject is far from settled; while some studies show that social media can actually improve teens’ sense of social engagement, others have found that young people are feeling increasingly isolated and depressed, likely in part as a result of distorted perceptions of others’ lives precipitated by social media. Amidst this controversy, a new study, published on Tuesday in The Lancet Child & Adolescent Health, examined the relationship between mental health and social media and found that it is more complicated than commonly assumed.

The study was impressive in scope, as it involved interviews with nearly 10,000 English children between the ages of 13 and 16. Researchers found that social media can have a particularly negative effect on girls’ mental health, not only because it increases their likelihood of being victimized by bullying, but also because it gets in the way of sleep and physical exercise. According to the researchers, social media itself does not harm young people’s development, but an overuse of online social networks can result in harmful consequences. As such, the researchers believe that strategies meant to decrease teens’ social media use may not be effective alone, and that strategies designed to reduce cyberbullying and improve sleep and physical health are likely more effective. The study also found that while boys also experience mental health challenges, these challenges are generally not linked with social media use, suggesting that more research on how social media affects boys’ mental health is needed.

The study’s finding of association between frequent social media use and mental health problems matches other research that has been conducted on the subject, such as a study published last year that found a link between the amount of time teens spend looking at screens and their probability of having depression. That being said, psychologists have stressed that the content of one’s social media experience is likely more predictive of mental health problems than frequency of social media use by itself, noting that there are many ways social media can promote mental health, such as strengthening social ties and exposing young people to others’ points of view.

While more research needs to be done to determine the reason for this gender gap, psychologists have suggested that it may have to do with the different types of content boys and girls engage with online. Girls are more likely than boys to focus on their physical appearance when using social media, which might mean girls are more likely to develop body image issues by comparing their appearance with others. Accordingly, Instagram, which is an app that in large part revolves around sharing pictures of oneself, has been found to be the most detrimental social networking service for young people’s mental health, followed by Snapchat, which is used in a similar way. For their part, Instagram has taken steps to try to reduce the negative psychological effects of its platform, starting with hiding the number of people who have liked a user’s picture to prevent social comparison that can leave people feeling isolated and inadequate.